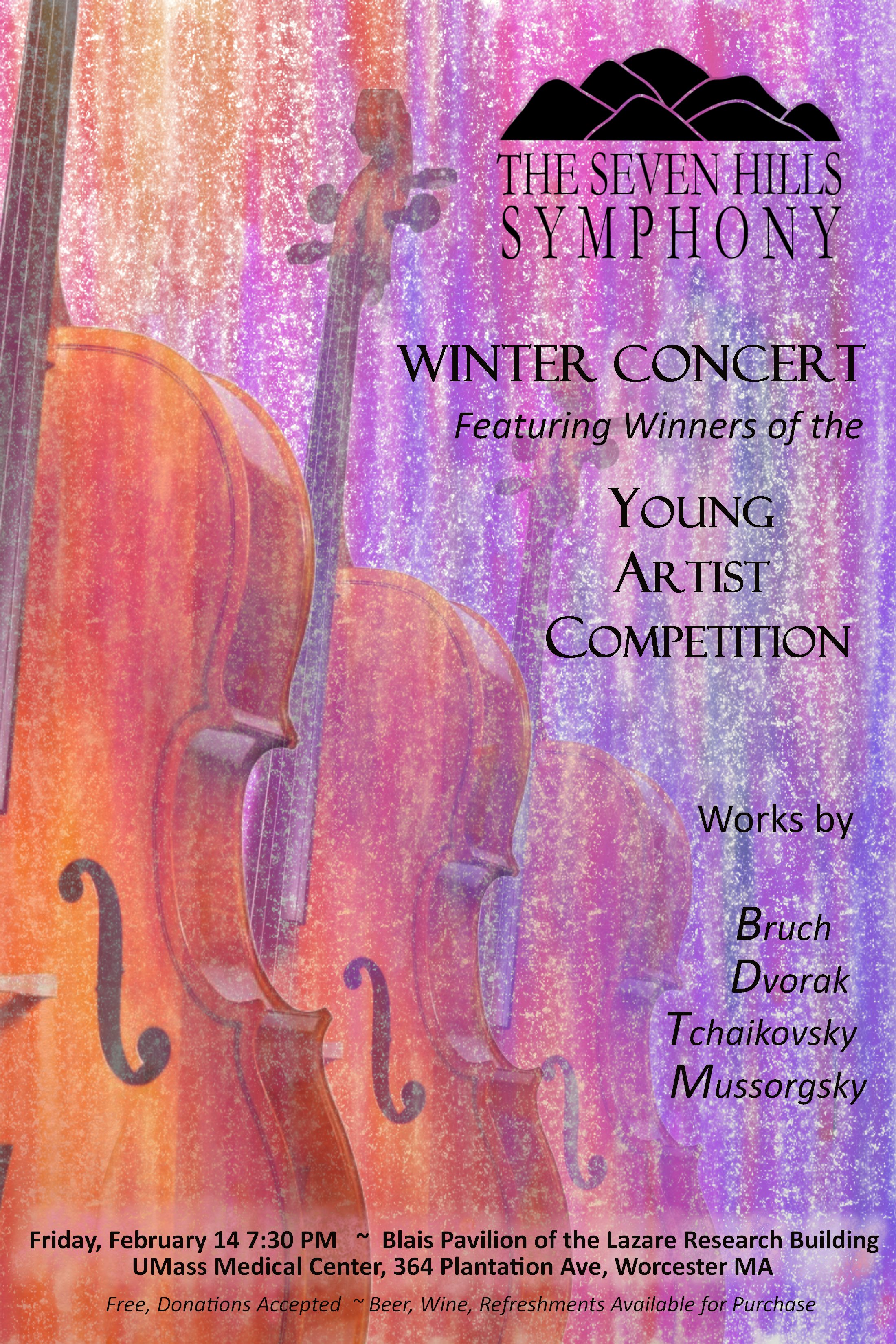 {slide=Tchaikovsky – Waltz from The Sleeping Beauty, op. 66}
The waltz was the signature dance music of the Romantic era. Starting with Beethoven and Schubert, it held sway throughout the 19th century in dance halls, ballets, operas and symphonic works. It has since come to characterize the carefree, even indifferent, mood of the Viennese and other bourgeoisie as social and political change erupted around them. Tchaikovsky used the waltz to great effect in his ballets Swan Lake and The Nutcracker and in his opera Eugene Onegin. In 1920, following the First World War, Ravel composed La Valse, an extended symphonic work that builds to a bitter, nightmarish end, as if to put a final end to the Romantic period.
{/slide}
{slide=Bruch – Violin Concerto No. 1, in G minor, op. 26}
Bruch wrote this first of three violin concertos in 1868. Arguably his most famous work, it was dedicated to perhaps the greatest violinist of the time, Joseph Joachim. The work omits the long orchestral exposition often associated with concertos of the time, and it links the first and second movements together without a break. While the piece epitomizes many of the qualities of Romantic music, with its rich orchestration and passionate solo passages, Bruch also paid close attention to Baroque-era counterpoint and the “new” classicism of Brahms.
{/slide}
{slide=Dvorak = Cello Concerto in B minor, op. 104}
Dvořák wrote his only cello concerto in 1894-95 while serving as the director of the National Conservatory in New York. Cellists had asked him to write a cello concerto for some time, but he always demurred, considering the instrument was not up to the task of performing solo. (Perhaps Mozart, Beethoven and Brahms never wrote a concerto for cello because they shared this opinion.)Dvořák may have changed his mind after attending at least two performances of Victor Herbert’s cello concerto in New York. Unlike Bruch’s Violin Concerto No. 1, Dvořák includes a lengthy orchestral exposition before the solo cello makes its bold entrance. It is considered one of the finest cello concertos ever written.
{/slide}
{slide=Dvorak = Symphony No. 8 in G major, op. 88}
Dvořák’s first popular symphonic success, Symphony No. 7, has been characterized as stormy and romantic. In contrast, his Eighth shows another side of the Romantic era’s capacity for variety. No. 8 is melodic and cheery, and relies heavily on the folk rhythms of the composer’s native Bohemia. Nevertheless, the fourth movement, allegro (quick, lively, bright) ma non troppo, (but not too much) combines beautiful lyric passages in the strings with driving, rhythmic fortissimo playing in the brass and timpani and in the orchestra in general.
{/slide}
{slide=Mussorgsky – Love Music from Boris Gudunov}
Boris Godunov was a departure from the prevailing style in European opera, as well as a deeply radical work in Russia. The work focuses less on the individual characters and more on the Russian people. Boris is portrayed as a reluctant leader, resignedly accepting his coronation as czar, bowing to the will of the people. The music utilizes Russian melodies based on folk motifs and the liturgy of the Russian Orthodox Church. Indeed, choral music plays a prominent role throughout. Many thought Mussorgsky’s orchestration was inadequate and, after his death, several composers tried to set his score to rights with re-orchestrations and revisions. Most prominent among these were Nikolay Rimsky-Korsakov and Dmitri Shostakovich. While the Rimsky-Korsakov re-orchestration of the opera dominated recordings for many years, in more recent times the original Mussorgsky version has made a significant comeback.

Love Music is derived from a scene in Act 3 of the opera, which takes place in the garden of the Polish
Palace. Just before the scene on which the music is based, the Jesuit priest Rangoni has persuaded Marina, a Polish noblewoman, to compel Gregory, the false Dmitri, (he had assumed the name of the murdered son of Ivan the Terrible) to seize the Russian throne. The action begins, then, with Marina seducing Gregory and recruiting him to the cause of replacing the country’s Russian Orthodox rulers with Polish Roman Catholic rulers.
{/slide}

{slide=Miranda Waltz-Peters, Violin Concerto No. 1 in G Minor Max Bruch}
Miranda Waltz-Peters is a 15 year-old violinist from Rutland, MA, and attends Wachusett Regional High School. She studies violin with Sophie Vilker at New England Conservatory’s Preparatory School. She also plays the viola in NEC’s Youth Philharmonic Orchestra, and is heavily involved in NEC’s chamber music program, both as a violinist and a violist. Her early violin studies were at the Joy of Music Program in Worcester, and she has been in JOMP’s Youth Orchestra for many years, where currently she is concertmaster. She also volunteers with Neighborhood Strings, a program run by Worcester Chamber Music Society that gives disadvantaged Worcester kids the chance to play stringed instruments.

Summers give Miranda time to extend her musical studies. During the summer of 2013, Miranda had the opportunity to tour Costa Rica as a violinist with her NEC orchestra and then to spend five weeks immersed in chamber music at Greenwood Music Camp in western Massachusetts. In the past, she has also participated in the Worcester Chamber Music Society Summer Festival and Point CounterPoint music camp in Vermont. This summer, she is hoping to return to Greenwood.

Miranda is excited and honored to be performing with the Seven Hills Symphony.
{/slide}
{slide=Spencer Eliot Kim, Dvorak Cello Concerto in B minor, op. 104} Spencer Kim is 15 years old and a sophomore at Belmont Hill School. He has studied cello with Eugene Kim for the past 5 years at New England Conservatory Preparatory School. Spencer initially studied piano from the age of 5 with Leslie Amper and then began cello at age 9 with Kirstin Peltz. At NEC Prep, Spencer is a member of the Youth Philharmonic Orchestra, conducted by David Loebel and Hugh Wolff. Spencer was selected to the 2014 National Honor Orchestra, conducted by Larry Livingston, and will be participating at the Music for All Festival in Indianapolis, IN, this March. He has participated in the MMEA All State Music Festival (2013), Senior District Festival (2013, 2014), and Junior District Festival (2011). Spencer placed as runner up and honorable mention at the MTNA Junior String competition in 2010 and 2011 respectively.
Spencer attended Foulger International Music Festival in 2012 and 2013. He has participated in master classes taught by Christopher O’Riley and Norman Fischer. He also enjoys playing in chamber music ensembles.

Spencer plays squash for Belmont Hill School and will be representing his school at
the U.S. High School National Championships on February 6-9 in Philadelphia. He
is also a member of the varsity sailing team. For fun, he likes to play ping pong with
family and friends.
{/slide}

There are nearly as many opinions as to when the Romantic period in music started and who the first Romantic composer was, as there are compositions in the Romantic style. While some proclaim Beethoven the first to compose Romantic music, others argue that he was merely stretching the rules of the Classical period − of which Mozart, Haydn and he were the leaders − not inventing a new style. Schubert is often cited as the first Romantic composer, but so little of his music was heard widely while he was alive (he died in 1828, only a year after Beethoven), it is problematic to nominate him as the first. On the other hand, Hector Berlioz’s Symphonie fantastique emerged as a large-scale, full-blown Romantic piece in 1830.

By the 1860s Romantic music was undergoing a major schism. The followers of Richard Wagner saw him as the future of music as he moved away from conventional tonality to chromaticism in his opera productions on mythic themes. Johannes Brahms on the other hand time was striving at the same time to reunite the classical style of the past with the Romantic music of his time. And, all the while, the Baroque music of J.S. Bach and Handel was being rediscovered and republished.

To define the Romantic style is even more difficult. The music was influenced by the political and social movements of the 19th century. The rise of nationalism and revolution and the increasing recognition of the individual are only two of the societal factors feeding Romantic composers’ imaginations. Musically, Romantic compositions gradually stopped following many of the formal rules of the Classical period. So, melody and harmony were freed from some of their former constraints. Compositions could stray further from their original key, more dissonance was accepted. By the same token, echoes of classicism may be heard throughout the Romantic era and beyond, just as the music of the Classical period − Beethoven, Haydn and Mozart − hinted at the Romanticism to come. The pieces that Seven Hills Symphony performs tonight all are firmly entrenched in the Romantic era, yet they also display the wide variation that easily fits within its structure.

Bring your WOO Card and receive a free snack